The current active spectrum can be cut by selecting "Operations - Wavelength range reduction" and specifying a base and top wavelength or using directly the defined segments/line regions. The user can also choose to replace the removed fluxed by zeros. 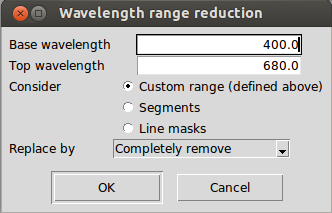 The wavelength, fluxes and error values of the active spectrum can be modified by applying a mathematical expression which can contain any combination of the following functions:

The functionality can be found in "Operations - Apply mathematical expression" and the current values can be used as variable names "waveobs", "flux" and "err". Some examples of the utility of this functionality:

The result of the mathematical operation should always be an array with the same number of elements as the original spectrum.

In order to filter bad measurements out, the current active spectrum can be cleaned by selecting "Operations - Clean fluxes and errors". The user has to specify a base and top flux and error. 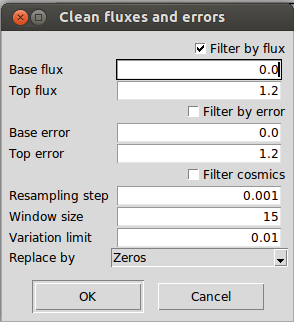 Additionally, the cleaning can be done by considering the mean and standard deviation of a limited region (between a top and base flux level). This option can be useful to remove cosmics residuals although it should be used carefully since it would remove also emission lines.

Finally, the user can chose to completely remove the fluxes or replace them by the continuum instead of zeros. 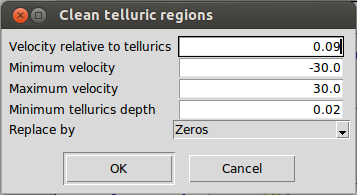 This functionality is mainly useful when the spectrum is going to be used as a template for measuring the radial velocity of another spectrum. Cleaning all this fluxes from the template reduces the impact of potential telluric lines in the spectrum to be measured.

By selecting "Operations - Resample spectrum", the current active spectrum can be uniformly re-sampled within a wavelength range and with a fixed step. 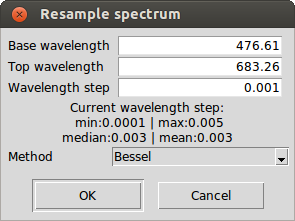 The interpolation method can be linear, bessel (4 points are considered at each interpolated point, the result tends to be smoother than the linear interpolation but it is not recommended) or spline (it might help to smooth the spectrum, but again, not generally recommended).

All the open spectra can be combine through "Edit - Combine all spectra" by using the mean/median, subtracting (active spectrum minus the rest), co-adding or dividing (active spectrum divided by the rest) the flux values. It is recommended that before doing so, all the spectra should be aligned (e.g., radial velocity corrected) and they should have the same resolution. 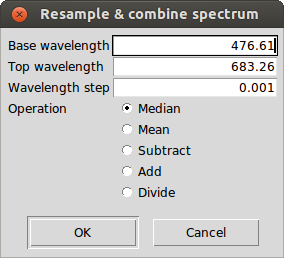 The process does the following operations: