iSpec incorporates an option for calculating the earth's velocity towards the earth ("Parameters - Calculate barycentric velocity" menu, algorithm based on Stumpff 1980) so that the spectra can be corrected and transformed to the solar barycentric reference frame ("Operations - Correct - Barycentric velocity" menu). For the determination it is necessary to know the date/time of the observation and the star's coordinates (RA: Right Ascension in hours, DEC: Declination in degrees) in epoch J2000.0. 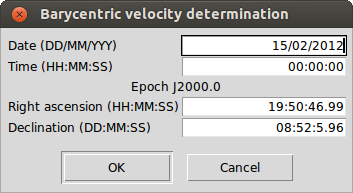 The velocity profile can be determined relative to three different references: 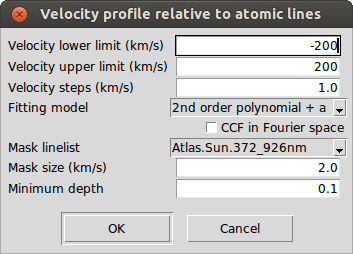 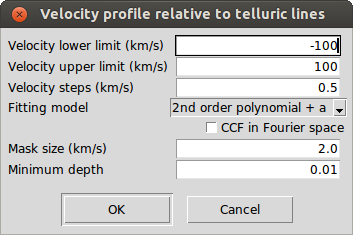 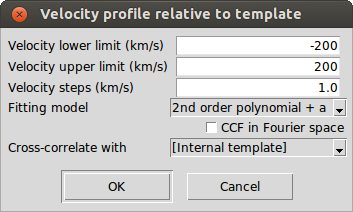 The generation of the velocity profile is done by an implementation of the cross-match correlation algorithm which sum up the spectrum's fluxes (f) multipled by a template function 'p':

The 'p' function represents the fraction of the line of a template spectrum (which depends on the spectral type of the star) that falls on a given pixel at a given velocity.

iSpec includes an internal template (it can be found in the directory "input/spectra/synthetic/") which corresponds to a synthetic spectrum of a star with Teff 5777.0, gravity (logg) 4.44 and metallicity 0.02 (solar type) which has been generated by using SPECTRUM, atomic data extracted from the VALD database (350 to 11000 nm) and MARCS model atmospheres. In case that another ground-base observed spectrum is used as template, it is recommended to clean the regions that may be affected by telluric lines.

In the case of selecting the option of using atomic lines, a mask is used instead of a template which means that the 'p' function has values only on the peak of the line and the value corresponds to the depth of the line. The possible masks line lists are:

For the telluric lines, the mask has been generated from the analysis of a synthetic spectra of the typical telluric lines obtained from TAPAS (an on-line service that provides simulated atmospheric transmission spectra for specific observing conditions).

Internally, for the cross-correlation process, iSpec creates a mask from the given line list with a user defined size. If one or more mask lines fall into one range, the max depth is assigned as the mask value (otherwise it will be zero).

Afterwards, it re-samples the mask uniformly in terms of velocity by using the specified velocity step (recommended to be half of the mask size). This implies that the distance between the elements in the mask is variable in wavelength but constant in velocity (depends on the mask size specified by the user). 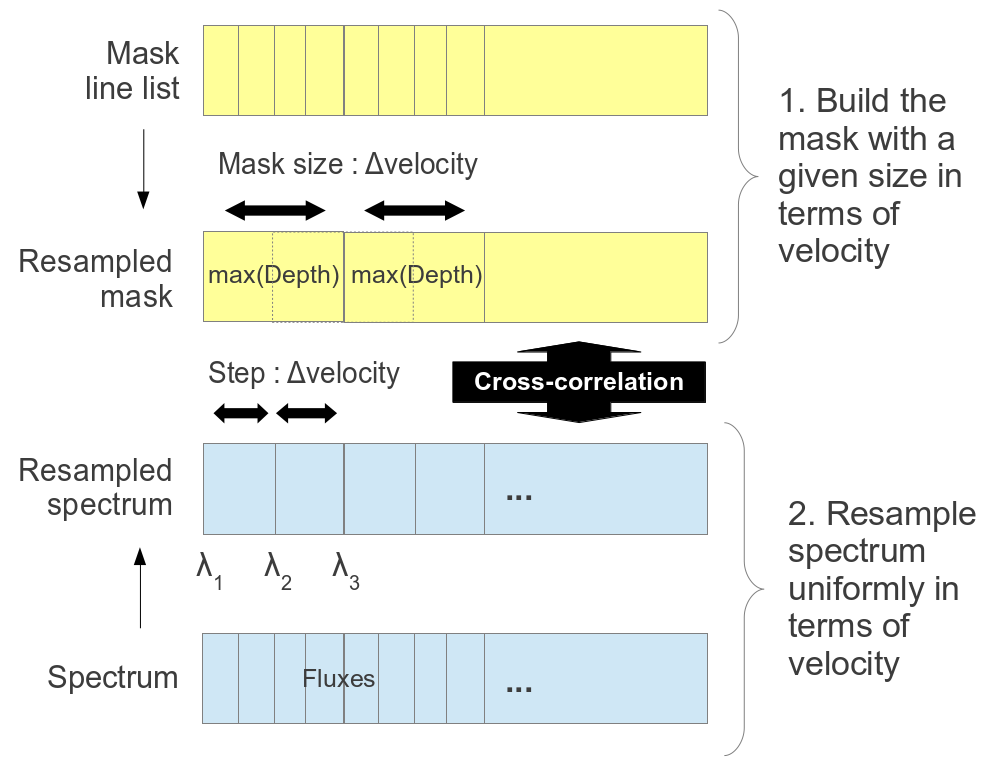 The following formula is used for determining the wavelength ranges:

After the mask construction, the spectrum is re-sampled to have the same points as the mask and the cross-correlation algorithm can be easily applied by shifting the mask values to the left/right (each shift represents a constant increment/decrement in velocity). This approach allows to reduce the computation time needed for calculating the velocity respect to the atomic/telluric mask.

The results are presented in a new window where the velocity profile is shown. The mean velocity is calculated by fitting a second order polynomial near the peak and additionally a Gaussian/Voigt is fitted (with fixed mean velocity) to determine other complementary parameters:

The error in the radial velocity is calculated following Zucker 2003:

where \(N\) is the number of bins in the spectrum, \(C\) is the cross-correlation function and \(C^{\prime\prime}\) is its second derivative.

The spectrum and the regions can be shifted considering the determined velocity (or indicating a custom one) by using the option "Operations - Correct velocity...". The following formula is applied:

where \(c\) is the speed of light in vacuum and \(\lambda\) the original wavelengths.

The velocity determination function relative to atomic data can be used to identify spectroscopic binaries. In those cases, the resulting profile would have two different peaks: 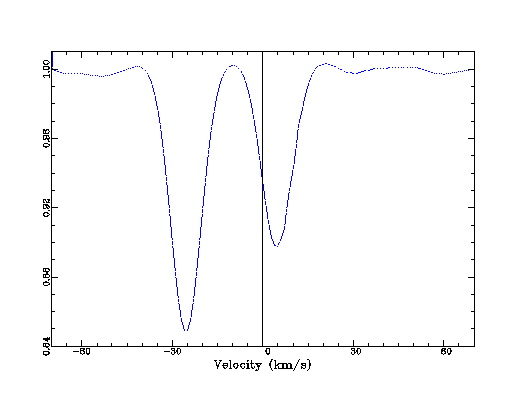 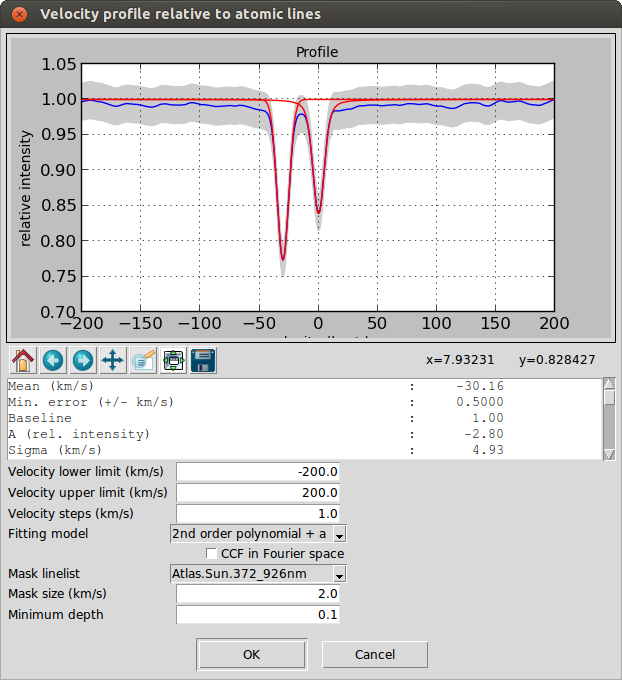 As an example, iSpec includes (in the "input/spectra/binaries/" directory) the spectrum of HD005516A observed with ELODIE

iSpec will try to automatically detect outliers peaks in the velocity profile in order to detect spectroscopic binaries and fit more than one Gaussian/Voigt.